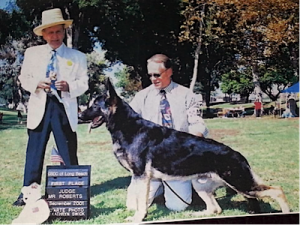 October 6, 1968, marked the date of the GSDC-SGV’s first Specialty Match held in Covina Park at which we had 234

entries – 55 in obedience! Shortly thereafter the club began offering obedience and conformation handling classes in Covina, open to the public, but with preference towards German Shepherd Dogs. Fresh off this success we contacted the American Kennel Club (AKC) to begin our certification process only to learn we needed to proof more “community interest” for our breed and its activities. To this end we entered our dogs in local Holiday Parades featuring the GSDC-SGV banners and with wagons adorned in our club colors (red, black & white) and, of course, our dogs and members. 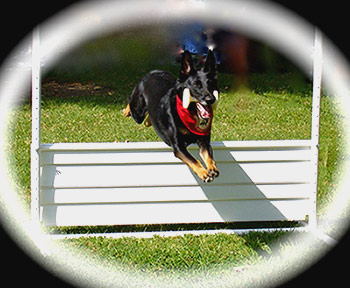 We organized and held obedience and conformation handling classes open to the public, but specializing in German Shepherd Dogs. Following numerous accolades from the surrounding communities who enjoyed seeing dog and handler teams working together, we finally received AKC approval to hold our first “B-OB” AKC Sanctioned Match on March 22, 1970, with 253 entries, which was followed by a number of “B-OB” Matches. Soon we applied for a license to hold an AKC Sanctioned “A” Match (the immediate predecessor to a licensed show). For those who have wandered into an already licensed club, this is an EXPERIENCE!! An “A” Match is run just like a licensed show-except in those days just like today the club could not hire a professional show/trial secretary because the club had to prove to AKC that it could do it all themselves. 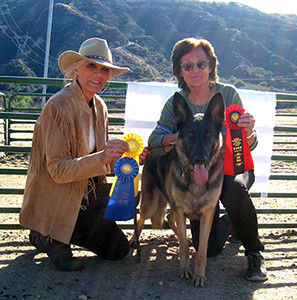 The GSDC-SGV’s first, licensed Specialty Show and Obedience Trial:  Happened on October 26, 1975, with 179 exhibitors twenty-nine of which trialed in obedience.

Our Present: Nearly fifty years later the club has evolved to its current state: approximately 50 members, annually hosting two specialty Conformation shows along with Obedience and Rally trials, plus two Herding Trials each year highlighting the “tending” style herding (AKC’s C-Course) ancestrally instinctive to our German Shepherds as well as other competition styles, and supporting various community canine events. Although our herding trials are open to all herding breeds with preference given to German Shepherds, to date the GSDC-SGV remains the only local/regional Conformation/Obedience and Rally specialty show and trials open only to German Shepherd Dogs. 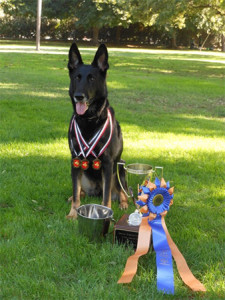 The GSDC-SGV advocates and encourages camaraderie between the other regional specialty clubs by supporting their events or assisting them in producing their own specialty shows and trials. In addition to AKC, we remain affiliated with our parent club, the German Shepherd Club of America (GSDCA). In 2013 we participated for the first time in the GSDCA’s annual Regional Club Challenge competing against other similarly sized regional specialty clubs, and we earned third place in the nation! We look forward to continually increasing our membership, participating in our community and together with our dogs remaining good ambassadors of and showcasing our magnificent German Shepherd Dogs.