Considered the finest all-purpose workers, the large, agile, muscular German Shepherd Dogs display a noble spirit and high intelligence. They move smoothly and quickly and naturally gait with a free and east trot, but when duty calls these strong animals can reach astounding speeds!

Recognizing the superior intelligence and work ethic of herding and farm dogs, early German breeders began developing the forerunners of today’s German Shepherd Dog. The GSD’s history traces back to the 1890’s and a German calvary officer, Captain Max von Stephanitz, who admired intelligent, strong dogs – the herding dogs from his homeland – and searched the land for one single dog that embodied his ideals. Finally when he attended a dog show with a friend in 1899, he found his dream dog.

Known as the father of our breed, von Stephanitz met a dog named Hektor Linksrhein at that show who impressed him 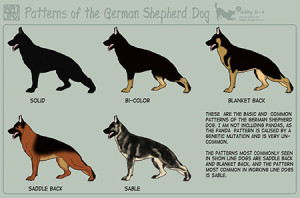 so much that he purchased him and formed Verein für Deutsche Schäferhunde (SV), Society for the German Shepherd Dog, later that year. Von Stephanitz renamed the dog Horand von Grafeth, and so he became the genetic starting point for the breed we know today. Horand’s most celebrated son was Hektor v. Shwaben, who in turn sired Heinz v. Starkenburg along with brothers Beowolf and Pilot. Each of these dogs produced offspring who became the pillars in the GSD’s development. As president of the SV, von Stephanitz guided the German Shepherd breeding programs following his motto which still holds today, “the German Shepherd Dog should be bred for utility and intelligence above all else.”

The early 1900’s marked the GSD’s United States debut, acquiring it’s biggest fame after World War I when because of their superior intelligence, GSDs came off the herding fields and farms and served as messengers, rescue, sentries and personal guard dogs alongside servicemen. (Their service career continued throughout WWII as well.) Big-screen superstars Rin Tin Tin and Strongheart also helped promote the breed as loyal family dogs and home guardians. 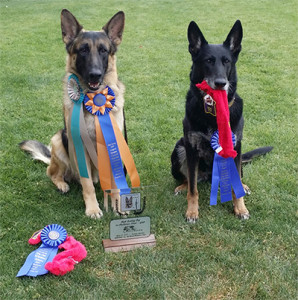 The American Kennel Club recognized the GSD in 1908, as part of the registry’s Herding Group. Though many retain instinct recalling their sheepherding ancestry and still work alongside ranchers and farmers eapecially tending the large flocks, today’s German Shepherds also fulfill a myriad of tasks as service and police dogs, in obedience, agility and conformation arenas, and as sentinels and family companions. Their high trainability and extreme loyalty and commitment truly make them an excellent choice for any agenda as they typically can accomplish most anything they’re asked to do and then some!

They consistently remain near the top of the AKC’s most-registered breeds and repeatedly secure their spot as one of the country’s most admired and recognized dogs.